Last night I was able to go to my sons football game! More specifically flag football. I watched proudly as he grabbed the other players flags and worked well at avoiding his own being taken. He has so much skill! The only problem? He was playing against his own team. 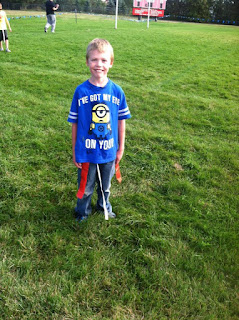 My son and two of his teammates were a little hyperfocused on each other. Not realizing or maybe just not caring that their goal should have been stopping the other team. Soon his impulsive mother (me) went over and tried to explain that he should be getting the blue flags and that these two boys are on his team.

I sat down ready to see him refocus his efforts only to see that nothing I said sunk in. Granted he is only eight but I still worried about what other parents were thinking about my child. I worked hard to turn that nagging mom comparing mind and went ahead and cheered on my son! He smiled and waved to me and I could tell he felt like a star out there and was having a great time. So it was then I realized my son had the opportunity to refocus my brain back on what really matters!
Posted by Laura Stoker at 2:25 PM