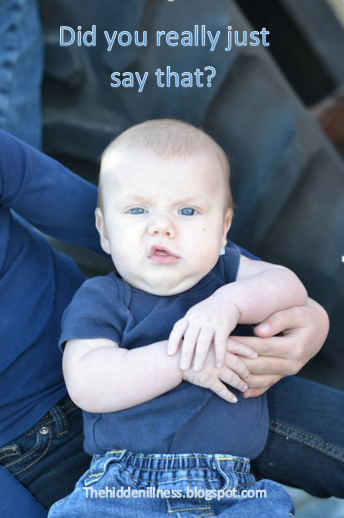 "I would never medicate my kid"

Never say never, you don't know until you are there. When your kid doesn't understand why he just did that and feels bad because he has impulse control issues. When no punishment matters because they can't control themselves, then they give up on themselves because they fail time and time again. When you watch your childs confidence crumble... you might just medicate…

“People are medicating their child to be a zombie”

I did not medicate my child so he would be a zombie. If anything I have found he was more of a zombie before medication. He was not focused, lacked understanding the world around him, and I could not communicate with him.

"There's nothing wrong with him. You are just expecting him to do better at school than what he's capable of. You should accept that he is average.”

Average I could handle it is being constantly at the bottom struggling to keep up that is the problem.

"People just claim their kid has ADHD so they can medicate them because they're too lazy to parent their child properly."

I guess this is why I have not medicated my other children?

“ADHD is a fake disease”

"Your child can control themselves if they really wanted to."

Can people control depression, bi polar, or autism (to name a few)? No. ADHD is a real illness that is beyond their control.

“He doesn't look like he has ADHD when I see him.”

Well try spending more than an hour with him.

“Back when I was growing up we didn't have that ADHD or ADD.”

Oh you had it, you just had less help and understanding.

"If he wanted to focus, he could do it."

Try telling the person struggling with chronic depression that if they wanted to happy badly enough they could.

"Give him the ADHD meds, problem solved."

Yes sometimes medication can be great for one family but really it can also be horror for another family. There is not always one clear cut answer for every child.

"If people would feed their children only organic whole foods ADHD would no longer exist."  or “Just eliminate gluten/food coloring/sugar out of his diet and he won't need medicine.”

I don’t know why you seem to have this image in your mind that my kid is sitting at home eating sugar by the pound.

"Oh maybe we have ADHD too.”

This feels like a slap in the face that every child struggles with exactly the same things but we are just looking into it too much or can’t handle a ‘normal’ child.

“ADHD is a just placed on boys with too much energy.”

If that was true I would be placing my two year old on a pill.

“Your child is just creative and giving medication is stopping that.”

You're right I hate creativity, I would rather live in a black and white world and stare at the wall.

Actually yes, I do...your ignorance might rub off on my child.

“If his father was home consistently you wouldn't be having the issues with him that you have.”

Yes it is a shame he has to go to work and provide for his family so they can have a home, clothing, and food.

“If you disciplined your child, there wouldn't be such a thing as ADHD!”

Would you be surprised to know my life was full of guilt because of constant lectures and time outs before an ADHD diagnoses.

"You just need to discipline (spank) him more" or "Maybe what he needs is a good smack."

I just have to say there is a difference between discipline and punishment. Spanking is punishment, discipline is teaching them to make good choices, to react in an acceptable way, to allow do-overs, and to place emphasis on the positives, the strengths not point out every little negative thing they do wrong that makes them feel worthless. That takes more work than spanking!

Plus I thought hitting your child was against the law these days.

"I'm gonna pray for him. Have you considered that this behavior might be a spiritual issue?"

Way to make me feel like it's all my fault for being a bad Christian/unfaithful.....prayer is awesome but can't cure a neurological condition!

"There is no way she has ADHD, she's too smart."

Ummm... the diagnosis has nothing to do with intelligence levels!

"He's just being a typical boy."

I guess me, his doctor, and psychologist have no idea what we are talking about.

Yeah I have been thinking about buying him a treadmill...

“All she needs is to spend a week with me; then she'd be a different person!"

Lady, if she spent a week with you, YOU would be a different person!

“She's just immature she'll grow out of it.”

So how behind do I let my child get in school while waiting for maturity to kick in?

"If every other student is doing it, he can too. He’s certainly SMART enough, he just needs to get it together!"

Like the "get it together" chats and punishments didn't happen years ago. They obviously didn't work and led us to reaching out and getting the help.

A big thank you to all the parents who helped put this together from A mom's view of ADHD! If there is one we may have missed please share in the comment section!
Posted by Laura Stoker at 1:08 PM

Email ThisBlogThis!Share to TwitterShare to FacebookShare to Pinterest
Labels: ADD, ADHD, CHILD, MOM, PARENTS, STRUGGLE. WHAT NOT TO SAY