My new friends over at Our ADHD Story got me to thinking this morning about ADHD. My most recent post was my attempt to tell my complicated story about having ADHD. I wasn’t sure where the post would end up, but my concluding sentence became “At 17 years old, I began to discover the impact of ADHD and saw it as what was WRONG with me. Now, at 38, I see it as everything that is RIGHT about me, my husband, and my child.”

Hmm…okay. So, in a way, my conclusion even surprised me. I certainly don’t think it’s the popular point of view. Some days, my ADHD makes me want to hide in my closet and never come out. Others, I feel empowered and strong.

Having a child with ADHD helps me to see the “gifts” that come with the diagnosis. It’s really difficult, as a mom, to see something my child has as a curse. But, believe me, I see the struggles. My child’s ADHD is so severe that it’s dangerous. I know that I am “lucky” that I don’t have it that bad.

Let’s look at the symptoms of ADHD. According to WebMD, symptoms (for adults) include:

Some things above, I consider to be contextual. Meaning, the judgement or benchmark set to consider the symptom a problem, pertains to our societal construct. In other words, we’re comparing ourselves with others to consider if we’re normal or not.

My ADHD becomes a gift when I am able to use it for my benefit without comparing myself to my peers. I quit using other’s behaviors and values as my measuring stick. I started to look for opportunities to partake in activities and lifestyles that allow me to set up my own framework, systems, and routines that are based on my strengths and abilities.

I quit judging myself on my ability to do things the way that others did them. Our society is all up in everyone’s business about how they accomplish things, the best way to do this or that, and HOW to achieve goals. If the focus was on the outcome only, there would be less judgement passed around and more acknowledgement of achieving a goal. Everyone wants recognition for “a job well done”, when again, that is only speaking to the “work” process it took to get there. I have spent many years beating myself up for not being able to achieve goals the traditional way. I wouldn’t allow myself to pat myself on the back for meeting a goal, because I would discount its achievement because I felt like I “cheated” because I didn’t do it the way the others would have recommended. Again, if you took all of that judgement and comparison away, an ADHDer’s method of achieving something would seem pretty badass, quite frankly.

Once you realize its a context disorder, and you can dismiss others insistence upon accomplishing things their way, you can start to focus on the gifts. The upside and gifts of ADHD include: 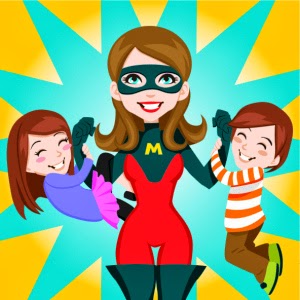 Thom Hartmann “posits that the people with ADHD may carry genetically coded abilities that once were, and may still be, necessary for human survival and that contribute richness to the culture” (MSN Healthy Living, 2001).

Well, that sounds pretty badass to me! (Coincidentally, I think this is what my Hubby meant the other day when he said that he thinks the existence and prevalence of ADHD has something to do with evolution.)

An article in Healthline states, “In essence, the traits associated with ADHD make for better hunters-gatherers and worse settlers” (Healthline.com, 2012).

So, if we were part of a tribe in Kenya, we would be pretty darn popular. We would be able to think on our feet better than others for hunting, gathering, and protecting our tribe. However, here, in our society, after 10,000 years of structuring agriculture and society, our ADHD isn’t as valued.

But, I’m really not willing to give up my modern conveniences for tribal living, and evolution hasn’t caught up with our societal structure. So, I do have to conform in many ways. There begins the anxiety, low self-esteem, and the self-loathing and judgement. Here, these badass ADHD traits don’t serve me in day to day living. So, what do I do?

Medicate. I take medication to help me live this life of structure and routines. This constant pace does not suit me naturally. Vyvanse helps me to follow through and focus in a way that society accepts (Vyvanse.com, 2014). I’m able to seem more successful, and get the necessities taken care of. Otherwise, I would continue to crumble in our society because I simply do not fit in.

One of the biggest changes I have seen from taking Vyvanse is that I am not as good of a multi-tasker as I once was. By nature, I can handle 45 things going on simultaneously. I can spin all the plates without any falling down. But, if you ask me to remember to pay a bill, wash the car, complete boring paperwork, and complete repetitive tasks, all the plates come crashing down on the floor. So, Vyvanse balances it all out a little bit. Now, I have to rely on technology to help me remember to do the “immediate” things that I used to be able to do automatically through multitasking. But, I am able to stick with projects longer and see things through, much longer than before. Now I can sit down and focus, and I have to set reminders on my smartphone to interrupt that focus to get all the little things done. In some ways, I do feel more productive in general, and better able to manage my household. However, I do have to write a lot more things down than I did before. My brain can’t seem to hold as much fluff as it used to.

I take Seroquel for sleep (Seroquelxr.com, n.d.). In 38 years, I don’t think I’ve ever slept. Now, I think its because in a previous life, I was the one who was on night watch in the tribe. My nerves seem to stand on end at night. The tiniest of noises is the equivalent of hearing a freight train go by my window. I didn’t realize how bad it was, until I started taking Seroquel. For the first time in my life, I am getting sound sleep. In our society, I MUST sleep at night to be able to complete the billion of tasks and family supervision required by our society during the day. It has been my torture for 38 years. Now that I am sleeping, my whole world has changed. I get up in the morning refreshed and am able to stay awake all day long for the first time. My body literally ached for rest prior to taking Seroquel. Now, I am much happier that I’m getting sound sleep. I sleep like a normal person. I fall asleep, and if I get woken up, I can fall right back to sleep. I’m not “out of it” either. If I must stay awake to take care of one of my children, I can. But now, I can fall right back to sleep afterwards. It’s amazing. It has changed my life. This drug is no joke as it is prescribed for those with bipolar and schizophrenia. I was hesitant to take it at first as I was taking it “off label”. I am so glad I finally listened to my doctor.

So, my medications have allowed me to be productive in our current societal constructs. But, I still have my baseline ADHD advantages and gifts. Medication helps me “evolve”, but I don’t want to completely eradicate my symptoms. I like being superhuman.

(Would you like to share your story or opinion on thehiddenillness? Email Laura at lles86@hotmail.com)
(ouradhdstory shares opinions and thoughts from others which are solely the thoughts of the author and do not necessarily represent my own.Warning language inappropriate for children)